It has been over a year since I became vegan.  At first my meat cravings were crazy strong.  I ate a lot of “faux meat” to combat these cravings.  However, since starting this blog in January I have been cooking for myself a lot more and not having nearly as many cravings.  But for the last two weeks I have been really, really wanting a good meaty pasta dish.  The first one I made was with  spaghetti squash and mushrooms.  That did not hit the spot at all.  On my second attempt, I used quinoa pasta and more mushrooms and added a few green lentils.  Although this was quite delicious, it didn’t hit the spot either. 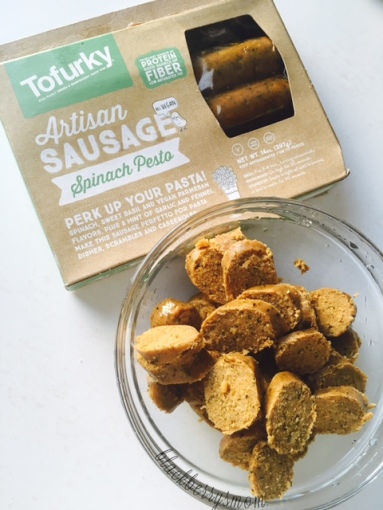 Because I have been eating mostly plant-based lately, I decided to indulge my cravings.  I saw this Tofurky Sausage with Spinach Pesto and it sounded so good I had to give it a try!  There are four nice size links in a package.  I used two “sausage” links, since I cooking enough pasta for 4 to 5 meals.  I cooked a few pieces in a non-stick pan just to get the true flavor.  They tasted like real sausage!  This always freaks me out.  I read all the ingredients at the grocery store, but the taste made me read them again.  I got a strong flavor of Parmesan cheese.  The spinach pesto gave the “sausage” a really good pasta worthy flavor.

I am not usually a Tofurky brand fan, but this item was a pleasant surprise.  I added mushroom, spinach, onion, and bell pepper to make my perfect pasta.

If you are giving in to an indulgence, the Tofurky Artisan Sausage with Spinach Pesto is not a bad choice.